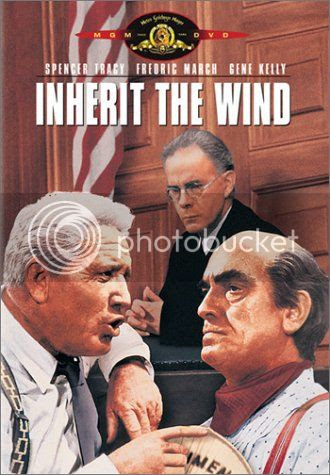 from 1960 Hollywood version of Inherit the wind: three of my favorite actos:
Harry Morgan in background. Spencer Tracy as the Clarence Darrow figure
(Henry Drummond) and FrederickMarch as the


Mano Singham writes a guest editorial for The Chronicle of Higher Education, "The New War Between Science and Religion." Singham has some academic credentials, he is director of the University Center for Innovation in Teaching and Education and an adjunct associate professor of physics at Case Western Reserve University. His article bemoans the fact that The Academy of Sciences is openly making room for religion and accepting the existence of religion as a domain beyond the level of scientific investigation:

The former group, known as accommodationists, seeks to carve out areas of knowledge that are off-limits to science, arguing that certain fundamental features of the world—such as the Heisenberg uncertainty principle and the origin of the universe—allow for God to act in ways that cannot be detected using the methods of science. Some accommodationists, including Francis Collins, head of the National Institutes of Health, suggest that there are deeply mysterious, spiritual domains of human experience, such as morality, mind, and consciousness, for which only religion can provide deep insights.
Prestigious organizations like the National Academy of Sciences have come down squarely on the side of the accommodationists. On March 25, the NAS let the John Templeton Foundation use its venue to announce that the biologist (and accommodationist) Francisco Ayala had been awarded its Templeton Prize, with the NAS president himself, Ralph Cicerone, having nominated him. The foundation has in recent years awarded its prize to scientists and philosophers who are accommodationists, though it used to give it to more overtly religious figures, like Mother Teresa and Billy Graham. Critics are disturbed at the NAS's so closely identifying itself with the accommodationist position. As the physicist Sean Carroll said, "Templeton has a fairly overt agenda that some scientists are comfortable with, but very many are not. In my opinion, for a prestigious scientific organization to work with them sends the wrong message."

....Just a couple of problems with this take on things. First of all labels those who are wise enough to understand that more forms of knowledge exist than just scientific knowledge as "accommodation" is like accepting the Marxist label of all those who have not joined the party was "obstructionist" or the label of all those who dont' want to do it Stalin's way (which means other communists) as "revisionists." Who are these guys accommodating? The enemy of course. Just in using the term this self professed "new atheist" has drawn the battle lines. What's pathetic is the fact that he's not describing a new war he's describing a new peace, but clearly he doesn't want peace. It seems that the world of science has reaches a point where they are willing to accept religion as an area beyond their domain and to strike up a new peaceful co-existence. But the new atheist can't have this. Religion is the enemy it must vanquished and driven out of existence. Any attempt at understanding is mere accommodation, selling out. His rationale:

Those of us who disagree—sometimes called "new atheists"—point out that historically, the scope of science has always expanded, steadily replacing supernatural explanations with scientific ones. Science will continue this inexorable march, making it highly likely that the accommodationists' strategy will fail. After all, there is no evidence that consciousness and mind arise from anything other than the workings of the physical brain, and so those phenomena are well within the scope of scientific investigation. What's more, because the powerful appeal of religion comes precisely from its claims that the deity intervenes in the physical world, in response to prayers and such, religious claims, too, fall well within the domain of science. The only deity that science can say nothing about is a deity who does nothing at all.

[1] My article on the truemenaing of supernature has appeared both in this blog (see "the Original Christian Concept of the Supernatural,"August 15,2012 URL:http://metacrock.blogspot.com/2012/08/normal-0-microsoftinternetexplorer4.html ) and on my webstie The Religious A prori. URL: http://religiousapriori.blogspot.com/2012/09/the-empirical-supernatural.html
[2]Richard H. Jones, Reductionism: Analysis and the Fullness of Reality. Cranbury, New Jersey: Associated University Presses, 2000, 39. Google books online preview:
URL: http://books.google.com/books?id=sUgnio874NUC&pg=PA39&lpg=PA39&dq=revolution+against+reductionism&source=bl&ots=RfQNUal7yQ&sig=Wputdv-lWVTdRJ0lJem2hrXHKZI&hl=en&ei=rWusTp3zG4risQLZzKXdDg&sa=X&oi=book_result&ct=result&resnum=3&ved=0CCQQ6AEwAg#v=onepage&q&f=false
[3] Metacrock, "How Many Atheists Are there?" Doxa: Christian Thought in the 21st Century, Online Resource, URL: http://www.doxa.ws/social/percentage.html