Science is a Social Construct part 2: A Critique of Science's Epistemic Limits Due to It's Socially Constructed Nature 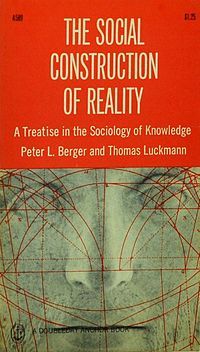 I.Closing off other valid forms of knowledgeand losing the phenomena.


The upshot of this entire argument is that scientific reductionism reduces the full scope of human experience and reduces reality from its full frame to preset conclusions than are already labeled "science" and "objectivity" and which screen out any other possibility. One of those possibilities is the phenomenological apprehension of God's presence through religious experience. In the conclusion to his famous Gilford lectures, Psychologist William James, whose Varieties of Religious Experience, is still a classic in the filed of psychology of religion, concluded that reductionism shuts off other valid avenues of reality.

The world interpreted religiously is not the materialistic world over again, with an altered expression; it must have, over and above the altered expression, a natural constitution different at some point from that which a materialistic world would have. It must be such that different events can be expected in it, different conduct must be required.This thoroughly 'pragmatic' view of religion has usually been taken as a matter of course by common men. They have interpolated divine miracles into the field of nature, they have built a heaven out beyond the grave. It is only transcendentalist metaphysicians who think that, without adding any concrete details to Nature, or subtracting any, but by simply calling it the expression of absolute spirit,you make it more divine just as it stands. I believe the pragmatic way of taking religion to be the deeper way. It gives it body as well as soul, it makes it claim, as everything real must claim, some characteristic realm of fact as its very own. What the more characteristically divine facts are, apart from the actual inflow of energy in the faith-state and the prayer-state, I know not."

But the over-belief on which I am ready to make my personal venture is that they exist. The whole drift of my education goes to persuade me that the world of our present consciousness is only one out of many worlds of consciousness that exist, and that those other worlds must contain experiences which have a meaning for our life also; and that although in the main their experiences and those of this world keep discrete, yet the two become continuous at certain points, and higher energies filter in. By being faithful in my poor measure to this over-belief, I seem to myself to keep more sane and true. I can, of course, put myself into the sectarian scientist's attitude, and imagine vividly that the world of sensations and of scientific laws and objects may be all. But whenever I do this, I hear that inward monitor of which W. K. Clifford once wrote, whispering the word 'bosh!' Humbug is humbug, even though it bear the scientific name, and the total expression of human experience, as I view it objectively, invincibly urges me beyond the narrow scientific bounds. Assuredly, the real world is of a different temperament,- more intricately built than physical science allows. So my objective and my subjective conscience both hold me to the over-belief which I express. Who knows whether the faithfulness of individuals here below to their own poor over-beliefs may not actually help God in turn to be more effectively faithful to his own greater tasks?"[1]


II.Philosohpical naturalism based upon
Circular Reasoning and Contradictions

In fact this way of arguing is wrong on two counts. First, it is based upon circular reasoning. The reasoning behind this notion goes back to the Philosopher David Hume who argued that miracles cannot happen because we do not have enough examples of them happening."A miracle is a violation of the laws of nature; and as a firm and unalterable experience has established these laws, the proof against a miracle, form the very nature of the fact, is as entire as any argument from experience can be imagined."[2]   We see this same sort of thinking used over and over again. Scientists sometimes resort to it. Nobel prize winning geneticist A.J. Carlson, "by supernatural we understand...beliefs...claiming origins other than verifiable experiences...or events contrary to known processes in nature...science and miracles are incompatible."[3]

The great Theologian Rudolf Bultmann, "modern science does not believe that the course of nature can be interrupted or, so to speak, perforated by supernatural powers"[4]. The context of Bultmann's comment was in proclaiming the events of the New Testament mythological because they "contradict" scientific principles.B. Hume's Argument against Miracles.The nature of this circular reasoning is pointed out by C.S. Lewis, who wrote:

Now of course we must agree with Hume that if there is absolutely uniform experience, if in other words they have never happened, why then they never have. Unfortunately we know the experience against them to be uniform only if we know that all reports of them have been false. And we can know all the reports of them to be false only if we know already that miracles have never occurred. In fact, we are arguing in a circle. [5]


The circular nature of the reasoning insists that there can be noting beyond the material realm. Any claims of supernatural effects must be ruled out because they cannot be. And how do we know that they cannot be? Because only that which conforms to the rules of naturalism can be admitted as "fact." Therefore, miracles can never be "fact." While this is understandable as a scientific procedure, to go beyond the confines of explaining natural processes and proclaim that God does not exist and miracles cannot happen far exceeds the boundaries of scientific investigation. Only within a particular situation, the investigation of a particular case can scientists make such claims.


Philosophical Naturalism based upon Metaphysical assumptions